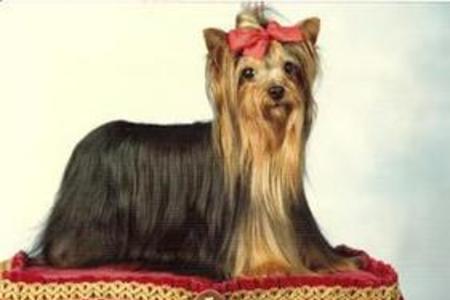 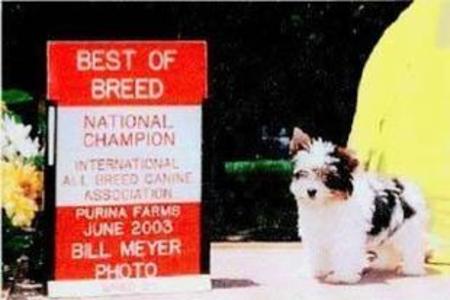 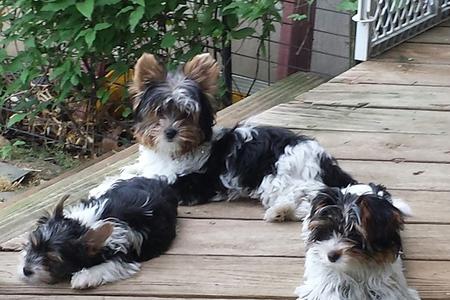 ​Quigi - Early year holder of most Best in Show Titles 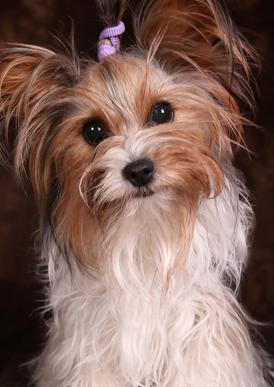 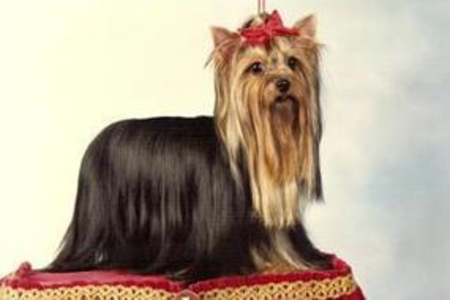 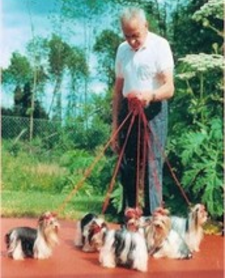 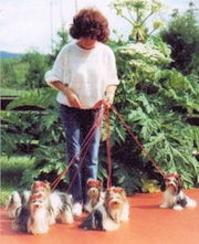 Shadow's But By The Grace Of God

I​​​​​NTRODUCTION OF THE BIEWER TO NORTH AMERICA:  We have Donna Hall to thank for introducing the Biewer to North American soil in 2003  Her work prior to the Biewer is quite impressive. Donna has been active in the Canine Fancy since 1975 and her contributions and commitment to the Canine Rare Breed community have not gone unnoticed. Donna participated abroad in many international dog shows and was actively involved with the Ibizan Hound and Shar-Pei breeds prior to their recognition by AKC. Donna's fascination with the Rare Breeds came early in her show career when she acquired her first Ibizan Hound.  She was also very active with the rare breed Basenji, performing well in the show ring.  Donna was active in her local club, holding the office of President, and was involved in the very first Basenji Lure coursing Club; however, it was while showing her Shar-Pei that Donna was introduced to the United Kennel Club.  The UKC fascinated Donna and gave her another venue in which to show her breed. Donna's Shar-Pei Flyers became the first Champions of their breed in UKC history.  Although the Shar-Pei was lovely, it was not what Donna was looking for in a new breed.  Donna's love for the toy breeds came to the forefront in 1992 when she was ​introduced to the Mi-Ki.  She soon started training and showing this little breed everywhere she could.  There were no stud books, so Donna became the founder of the first Stud books on the breed.  A UKC judge informed Donna that under their rules and regulations, a breed of dog that was not yet recognized by UKC could be shown in the miscellaneous class.  So Donna helped co-found the first Miki Club, held shows, and obtained the first Miki Club championship and the first Miki Club grand championship.

It was during Donna's trip to Germany, while showing at a European exhibition, that she was first introduced to the tiny, animated little breed we know today as the Biewer.  Donna was intrigued with the tri-colored little dogs and made arrangements to visit a kennel while in Germany.  Ultimately, she met a breeder and placed a reserve on a future breeding.  When Donna returned to America she founded the first american  club, The American Biewer Club (ABC or sometimes known as Biewer Club of America).  Donna began contacting several American Rare Breed Clubs and requested consideration for the Biewer breed to be exhibited in conformation events.  She was successful in gaining recognition for the Biewer to be shown with the International All Breed Canine Association, as well as the North American Rarities.  The International All Breed Canine Association, also known as the IABCA, was the first show venue to allow entry to the Biewer in June of 2003.  The first two Biewers to enter the show ring in the US were a little male called Decoration and a female called Delux, both imported at the same time. Decoration was the first German Biewer to receive his Championship and the first of his breed to win Best in Show.  During the early years, beautiful male named Quigi held the most Best in Show titles.  Since those historic shows, numerous Biewers have been shown at sanctioned IABCA shows in the United States and Canada.  Following acceptance by IABCA, the Biewer was allowed to be shown in Rarities, better known as NAKC or the North American Kennel Club.  In 2004, The American Biewer Club held its first National Specialty, with Diana taking Best of Breed.  She was a beautiful predominately white female with nice bone structure and a perfectly level top line.  The American Biewer Club, also known as the Biewer Club of America, and its membership stayed true to the original Biewer Breed Standard set forth in Germany under UCI/RVD (reference number of 00/490).  They were partners with the original German Biewer Club.  The North American Kennel Club also chose to follow the Standard submitted by Donna Hall and the American Biewer Club.  Today, the Biewer Breed Club of America (BBCA) continues to show under the same original Standard and with the same venues.

BIEWERS AROUND THE WORLD
The breed has continued to gain in popularity here and around the world.  On April 20, 2009, the RKF of Russia officially recognized Biewers as a breed of their own and as decided by the RKF Breed Committee the name of the breed is "Biewer". The International World Dog Show was held in Moscow in September 2009. This event is a three day show and was the first which allowed Biewers to participate.  The Russian Biewer Club had it's first meeting January 29, 2010, and their members have participated in many dog shows.
South Africa is home to the Western Province Biewer Breed Club. Alet Fourie, formerly a BBCA member, is the club president. Their dogs are registered with the South African KUSA and participates in many show events.
The country of Latvia has also been host to shows which allow Biewers to participate. Judge Bob Brampton, shown in this photo, awarded a Biewer a Best in Show.
​
October 12 2012

On behalf of the entire BBCA family we would like to express our condolences to the family of Mrs. Gertrude Biewer.  We received the sad news that she passed away October 10, 2012 after a lengthy illness. As co-founders of this amazing breed, Mr. and Mrs. Biewer hold a special place in our hearts and we could never thank them enough for the legacy they left behind. As time moves on, the development of the Biewer continues, we will honor them by following their Standard and keeping pure the German bloodlines they worked so hard to develop.

​Since 1984 the Biewer a' la Pom Pon, as the breed was originally known, has provided enjoyment to those which brought them into their lives.

Biewers have a wonderfully sweet disposition and are the perfect family pet, whether one resides in the country or a high rise in the city.

They are non-shedding, hypo-allergenic, with long coats which can be either kept floor length or trimmed into a manageable length.

To understand how we were blessed by this amazing little breed, let’s take a look back to where it all began.
The Biewer, pronounced (Beeva) originated in Hunsruck, Germany in 1984.  After raising and showing Yorkshire Terriers for 20 years,

Werner & Gertrude Biewer created the first Biewer through the occurrence of a recessive piebald gene in their Yorkshire Terriers.

Both dogs were blue and tan and world youth winners in 1981 at Dortmund.  Their mating produced the first blue, white, and gold Biewer,

"Schneeflocken von Freidheck", born in January of 1984.  Through selective breeding, the couple continued to reproduce the signature head

piece with all three colors, blue/black, white, and gold in good symmetry.  The belly, chest, legs, and tip of the tail were characteristically white

and silky, not curly.  The tail meant to be full.  The back colored blue/black with white in it. The Yorkshire Terriers that produced the Biewer

originated from the Streamglen Kennel.   There is some speculation, although not substantiated, that an accidental crossbreeding may have occurred in this kennel that did not show up until many generations later through Mr. Biewer’s dogs.   Mr. and Mrs. Biewer had 4 Yorkies from Steamglen, two of which produced the tri-colored dog.

Mr. Biewer first introduced his tri-colored dogs to the show ring in March of 1988 at Wiesbaden, Germany. He presented two dogs and called

them Black and White Yorkshire Terriers. The VDH denied the acceptance of the dogs being a breed of their own. Instead, they were designated

as being “the wrong color, not for breeding”.  Mr. Biewer was unhappy with this decision and began his search for a registry that would accept

his beloved dogs as a separate breed. The ACH (Allgemeiner Club der Hundefreunde Deutschland e.V.) was the first club to accept them as a

distinct and separate breed. The dogs were then registered as Biewer Yorkshire a’ la Pom Pon.

The name “a’ la Pom Pon” came from a unique story. While dining one evening, the husband of singer Margot Eskens presented his wife with

a Biewer Yorkshire puppy on a platter as a gift. The phrase “a’ la Pom Pon” is French and translates “a tassel or colorful ball of yarn”, which

In 1989 the Biewer was accepted as its own breed with the ACH German e.V.   When Mr. Biewer signed the standard for the Biewer Yorkshire

a’ la Pom Pon, it was that of a Yorkshire Terrier with the coloring being white-blue-gold. The standard was short and brief at the time.

Other breeders were intrigued with the little dogs and began breeding them as well. Among the first breeders were the “Agridesheim” and

“Sonnenhof” Kennels. Mr. and Mrs. Biewer kept a close reign on the Biewer breeding programs in Germany, so their quality-breeding dogs

were hard to come by and were quiet costly.  Mr. Biewer passed away in 1997, but his legacy lives on through his exquisite breed. After

Mr. Biewer’s death, many breeders took short cuts in their attempts to create the perfect Biewer. We will never know the complete truth

about the beginnings of this exquisite breed, but we will protect their legacy until the end.

By the year 2000, the Biewer had lost its popularitiy in Germany and the number of breeders had dwindled significantly. It wasn’t until the

breed was introduced in America that its popularity revitalized.
​
Our goal is to continue the development of the Biewer in America to the standard approved by Mrs. Biewer, a standard that is truly unique to

the Biewer. We will forever be indebted to Mr. and Mrs. Biewer and are committed to continuing their legacy.