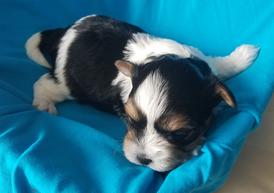 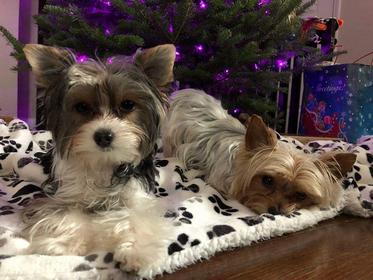 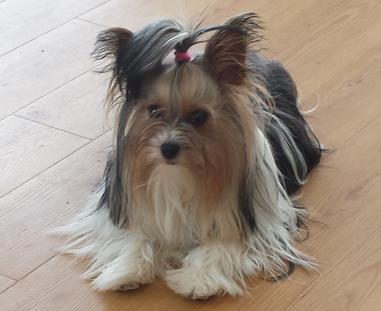 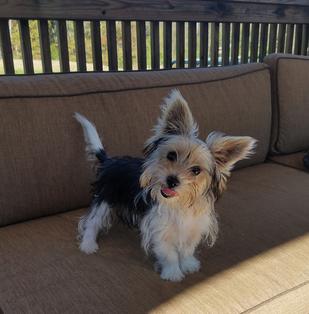 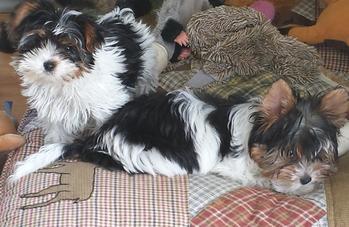 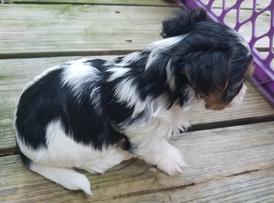 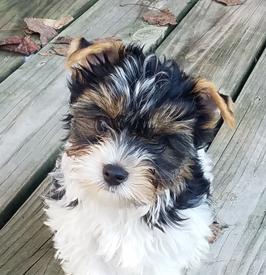 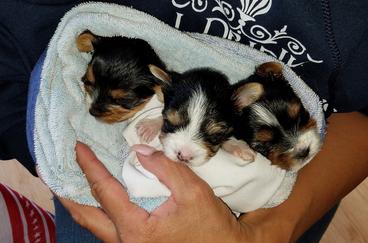 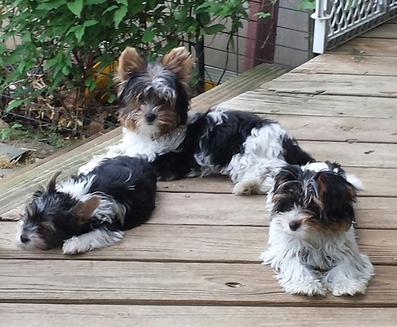 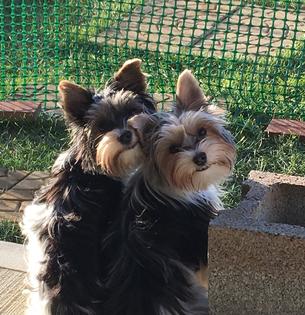 General Appearance— The Biewer Terrier is an elegant, longhaired, uniquely colored toy terrier with a breed signature ponytail. The coat parts down the middle, hanging straight and evenly on both sides of the body as though a comb has been used to part it.  The back is level, with height at shoulders being equal to height at the croup.  Although the outline of the dog gives the appearance of a square, the body length is slightly longer than the overall height.  The tail is set high and carried well arched over the body, covered with a long luxurious plume.  The Biewer Terrier has a lighthearted whimsical, childlike attitude.  Although mischievous at times, they are obedient and make a loyal companion.

Size, Proportion, Substance— Size- Height at the shoulders is the same as the height at the croup, measuring 7 to 11 inches, with weight being 4 to 8 lbs.  Proportion- Length of body from prosternum to ischium is longer than over all height, making the dog off square although square is acceptable.  Substance- Body is fine to medium boned with a level top line.

Head— Expression- Is more human than that of a dog, being bright and intelligent.  Eyes- Are medium sized and may be round or almond shaped with a crisp, clear countenance.  Iris – as dark as possible.  Ears- Are small, upright, V shaped, moderately wide set and covered with hair except the tips being shaved.  They are set to the back of the skull and the base is level with the eyes.  Skull- Slightly rounded.  Stop- Moderate.   Muzzle- One-third the length of the head.  Eye rims, Nose, and  Lips- Completely black.  Bite- Level or scissor bite.  Teeth- Straight and even.

Neck, Topline and Body— Neck- Moderate in length, free from throatiness.  Topline- Level.  Body- length is slightly longer than the overall height although square is acceptable.  Chest- Comes to the elbows with a good width.  Ribs- Moderately sprung.  Underline- Slightly tucked up.  Back- Level topline.  Loin- Well developed and strong.  Tail- Set high when in movement carried well arched over the body in a graceful sickle curve, covered with a long luxurious plume.  Plume lies to either side of the body.  Length of tailbone must go to the stifles or longer.  When reposed, the tail may be relaxed.  A Kink in the tail is not to be faulted.

Serious Faults- Roach or rounded back; high in the front or rear;

Forequarters— Forelegs should be straight, elbows neither in nor out.  Angulation- Moderate.  Shoulders are nicely laid back to allow for good reach and freedom of movement.  Elbows- set close to the body.  Legs- Straight when viewed from the front are muscular and covered with hair.  Pasterns- Up and straight.  Dewclaws- May be removed but not required.  Feet- Round.  Toes- Well arched covered with hair which may be trimmed not to impede movement or trimmed to show the shape of the foot.  Pads- Black and/or flesh.  Nails- Black and/or white.

Coat— Long and flowing with a soft silky texture.  Hair is straight without an undercoat, hanging close to the ground if not touching.  Coat maybe trimmed to floor length for ease of movement.  Head fall is tied up into a single ponytail on top of the head, hanging loose.  Puppy ponytails may be placed a little lower on the head as to gather the short hairs.  A bow is used for adornment; no topknots or rollovers.  Feet are trimmed for a neat, clean appearance. Trim around anus. Head falls that display topknots, or roll over’s shall be so Severely Penalized as to be eliminated from competition.

Color— The Biewer Terrier is a uniquely colored toy terrier.  Head Coloring- Blue/Black, Gold/Tan and White in good symmetry. Any combination of the following two colors, (Blue/Black and Gold/ Tan); (Gold/ Tan and White) in good symmetry is acceptable.  Body Coloring- Hair on back is blue/black and white.  Amounts of each color are of personal preference with no dominating patterns. No amount of tan hair may be found on the back, belly, chest, legs or feet.  A small amount of tan hair may be found around the anus.  Chest, Stomach, Legs and Tip of the Tail- White. The white from the chest should come up the neck to cover the chin.  Legs are to be white from the elbows and stifles to the feet.

Serious Fault –any other color than those that are listed.

Gait— The Biewer Terrier moves with confidence and pride. Movement should be graceful, smooth and straightforward without being stilted or hackneyed.  When viewed from the side the top line remains level, he gives an impression of rapid movement, size considered.  Hind legs should track in line with the front legs, going neither inside nor outside.  Tail must be up when in movement.

Temperament— Intelligent, loyal and very devoted to their human family.  They have a fun loving, childlike attitude that makes them a great companion for all ages.  They quickly make friends with animals of any origin.

The foregoing description is of the ideal Biewer Terrier.   Any deviation from the above described dog must be penalized to the extent of the deviation.

Serious Faults;  Roach or rounded back; Hackneyed gait in adults; Incomplete pigment on the eye rims, nose, and lips; ears not standing erect; over 8 lbs., Any other color than those that are listed. 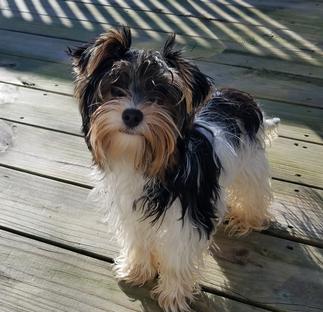 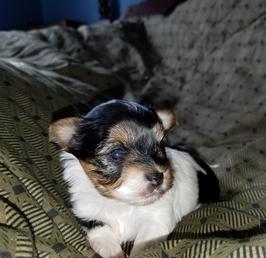 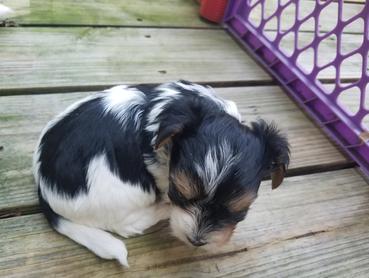 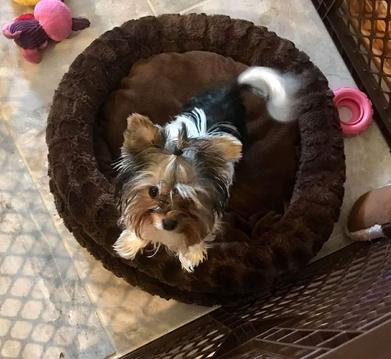 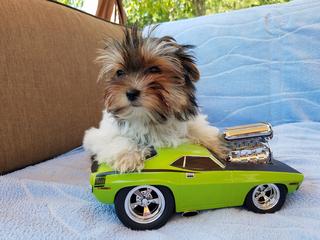 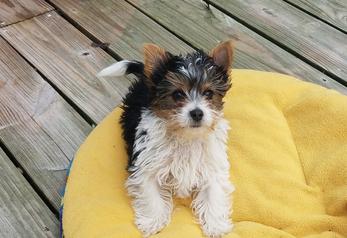 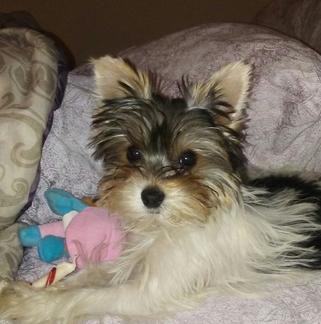 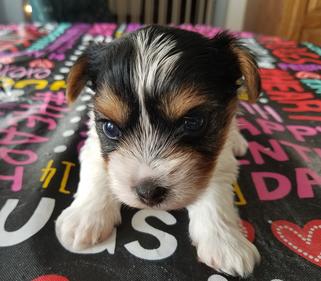 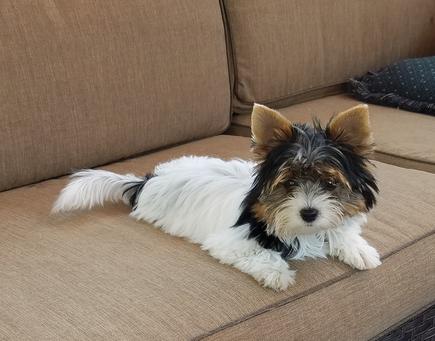 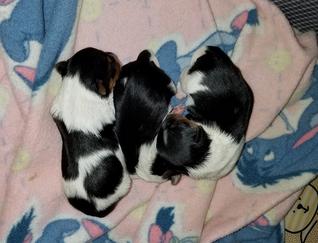